All wildlife naturally lives alongside parasitic organisms and healthy animals keep parasites at manageable levels. However, sick or injured individuals can soon be overwhelmed by a parasitic burden and in the worst cases will die, usually in conjunction with an infection related to them.

Infections and diseases are often found in stranded marine mammals. These can be insignificant and only affect a certain part of the animal, especially through injuries. Sometimes they can be of major significance though, such as sepsis, which can threaten their life.

Common seals in the Baltic and North Seas, including along the East English coast, have been severely affected by outbreaks of Phocine Distemper Virus (PDV) in 1988 and 2002, with many thousands of animals dying. PDV itself was not the primary cause of death in many of these animals, numbering in the thousands, but secondary infections such as pneumonia.

Cetaceans can be affected by navigational errors. A few years ago a pod of male sperm whales ended up in the North Sea rather than the Atlantic ocean. The North Sea is shallow and contains no prey species. It is believed all of them ended up dying stranded on beaches of countries surrounding the North Sea including England, France, the Netherlands and Germany. A similar situation occurred with northern bottlenose whales in 2006, which lead to one whale swimming up the River Thames into central London. While these navigation errors could be natural (there have been records of sperm whales in the North Sea for centuries) noise pollution (see below) could also be a factor. 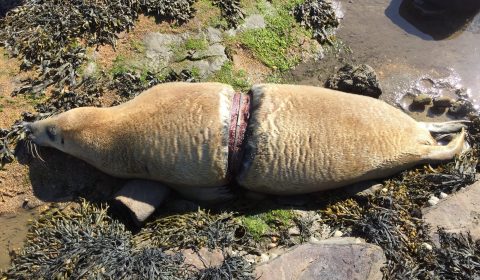 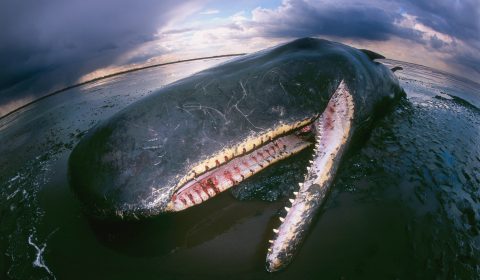 It is well known seals and cetaceans are vulnerable to bycatch and entanglement. Bycatch is the accidental capture of a non-target species in fishing gear, and is suspected to contribute to several hundred seal, dolphin and porpoise deaths per year in the UK. Meanwhile, entanglement (the entrapment of any creature in any form of marine pollution – fishing gear, plastic waste etc) is often reported in seals and recent research shows that the rate of entanglement in one area of the UK could be as high as 4%. Sadly they are often difficult or impossible for rescuers to access to cut free, and we have to wait until they are found in a location where it is safe to handle them appropriately with enough Medics and the right equipment.

Plastic litter causes severe problems if ingested by marine animals, and, in addition, plastics break down into microplastics which enter the food chain giving further cause for concern over the long-term health of all marine animal species as the toxins bioaccumulate.

Contamination of food chains by chemical pollutants such as PCBs and chlorinated hydrocarbons are also recorded as bioaccumulating in apex predators as they are longer lived and store pollutants in their body tissues. This is known to cause immunosuppression, endocrine disruption, fertility problems and other health issues.

Prey depletion by overfishing and habitat degradation by commercial and industrial activities are both perennial threats to marine animals. Climate change, sea level rise, ocean acidification and sea temperature rise all have concerning effects on the marine environment, many of which are not yet understood, but could also contribute to population declines as well as displacement from natural ranges, distribution and favoured haul out and foraging sites.

Human disturbance is also a significant direct threat, especially in the seal pupping season where pups are born on easily accessible beaches or otherwise turn up in public places during their post-weaning dispersal phase. These are sometimes approached and handled by people, or attacked by dogs, which can break thject her pup, leaving it to starve to death in the case of unweaned pups. 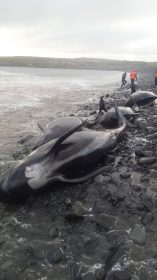 For weaned pups they will be at risk of injury and infection too from dog bites, but sometimes they could be exhausted and underweight, so being attacked, stressed by people coming too close and handling them or putting them back in the sea can all contribute to their deaths as the cumulative effects of repeated disturbance and inappropriate behaviour towards them take their toll.

On a larger scale, people approaching seals or making loud noises, even at a distance, can cause entire colonies to stampede to the water to escape a perceived threat, causing injuries to themselves and unborn pups, wasting their energy, and separating mothers and pups. Although seals are confident swimmers and will approach divers and swimmers out of curiosity in the water, the opposite is true when on land as they are vulnerable and unable to escape as quickly, so are generally very wary of nearby anthropogenic activities. Guidelines for wildlife-friendly watching practices from land or by boat are readily available online and should be adhered to (www.wisescheme.org).

As year-round tourism, public awareness of seal haulout sites and recreational activities such as boat trips, kayaking, paddleboarding, coasteering and drone operation are increasing, the threat of persistent, repeated severe disturbance incidents in certain areas may potentially cause abandonment of the area by seals for less favourable ones.

The same is true of cetacean populations. Whales and dolphins are often harassed by boats, jetskis and the like if they approach a shore close to human activity. While some dolphin species will approach boats to ‘bow ride’ this should always be initiated by the animals, not the boat.

Cetaceans primarily perceive their world through sound (not sight as we do) via echolocation. When encountering cetaceans it should be remembered they are all protected species and any intentional or reckless disturbance is an offence and the people involved can be prosecuted.

Marine noise from private and commercial watercraft, military and industrial activities can inhibit cetaceans’ ability to hear each other, locate prey and be able to properly perceive their world. Indeed there have been recorded cases of cetaceans becoming live stranded through the effects of underwater noise around the world including the UK. Some cetaceans may appear to be relatively tolerant of disturbance, but there are likely to be limits and these limits are likely to be tested as maritime industry and coastal tourism continues to develop and expand.